How to Stay Consistent in Your Business 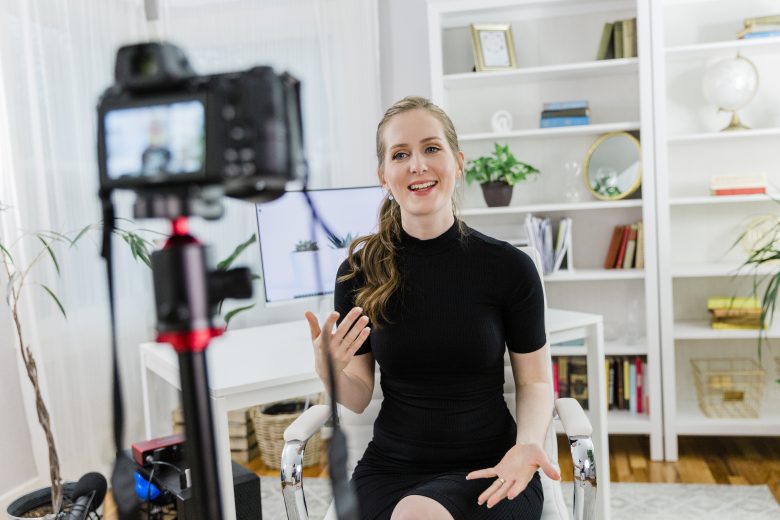 The first thing is you need to make sure that you have proof that you’re on the right track. It is really tough to motivate yourself to work on something if you aren’t even sure that the work you’re going to do is going to pay off. I remember when I was first trying to build my business, I really struggled with being consistent. I would blog for a couple of weeks or make a video here are there.

That’s because I wasn’t making any money yet and so I had no proof or validation that I was on the right path, that people really wanted, what I had to offer, or that my efforts were going to pay off long term. So the first thing you need to do if you haven’t already earned the first few dollars in your business, so you do have that positive proof.

The next thing to do if you want to be super consistent is to make sure that you are prioritizing true productivity. What I mean by that is doing work that actually produces something tangible, maybe not physical. It might be something digital or even just an idea, but you need to be producing something. I’ve noticed that I feel the best about the work that I’m doing and that my business is the most successful and I earn the most when I am producing things. So whether that is producing a YouTube video, or producing a new course, producing a podcast, or creating an SOP for my team to use. Even in my personal life, maybe I’m cooking and producing a meal, or maybe I’m growing the baby, and that would be a very, very productive thing to do!

Prioritizing the productive work is both the way to stay consistent because it’s so rewarding, but it also means that when you do show up in your business or for your goals, you are really going to get that impact that you’re looking for, and move things forward.

The third thing is to make sure that you get clear on tasks you need to complete. It’s very good to say ‘Yes, I will prioritize productive work,” but if you don’t know what that productive work is, then it’s really tough to do it. You need to do some good, solid, thinking about what you can do in your business that really has the biggest impact.

The number one thing that you do in your business has the greatest impact I call that the Prime Mover. For me a couple of years ago I identified that the prime mover in my business was creating great YouTube videos. If I created more great YouTube videos, then I got more views, which translated into more leads for my business, more customers, and ultimately more profit at the end of the day.

You need to figure out exactly what your prime mover is. Whether that’s in your personal life or in your business, which thing gives you the greatest then for your boss or bang for the time that you put into it.

The fourth tip is, don’t be a perfectionist. Now, I know that for some of you this will come really easy in fact for some of you maybe you need to hear the opposite maybe you need to be trying a bit harder. I know when I started my business, I definitely needed to try a little bit harder, but it was just kind of a case of live and learn. I needed to try doing some things and get the negative consequences that came from doing very imperfect work and messing up and not being careful enough. That gave me feedback that showed me that I needed to try harder. For a lot of people, and even myself now, a lot of the time I don’t produce things, I don’t make progress, maybe I don’t even take action at all, because I can lean into being a perfectionist.

I found that my business does the best and I just show up consistently and I do quality work. That is my best option because it’s better to show up and do the quality work and not show up at all. It’s better to do something than to not do the perfect thing.

The last thing is to make certain parts of your routine, non-negotiable. Now, do not create too many of them. I don’t want you to try to structure your entire life and say I’m absolutely sticking to this. I love doing that sometimes, but it can be really, really hard to stick to. So instead what I’m talking about here is figure out what those few things are that are the most important things, and then decide exactly when you’ll do them and make that your absolute your thing that you organize everything else around so that you can show up and do that thing.

For me, one of the first things that I did with that was I realized you know that YouTube videos were so helpful for my business. I decided every single Monday, I will film a YouTube video, no matter what. That really allowed me to take out the part of kind of the emotional side of struggling with it. You might think that this is like writer’s block. I didn’t succumb to writer’s block anymore because I was just going to show up, no matter what. So whether I felt like it or not, honestly, whether I was sick or not. Now of course if I was on my deathbed, then there might have been an exception, I can’t remember a single time when that ever happened so even if I had a cold or the flu, I could still sit down and at least try.

Now, I’m not talking about being a crazy workaholic and going to work and working really hard every day even if you’re sick. That’s not what I mean at all here. I mean having just a couple things in your schedule, that are the most important things and doing them absolutely no matter what, whether you’re traveling with your feel like it, whether you’re sick, just doing those things. I know that a lot of writers, have a consistent routine of writing for an hour every morning and they do that, no matter what, even if they have writer’s block, they still show up and write that hour every single morning, and that is how they managed to get books written and get books published.

A completely different sort of thing might be your wake-up time, maybe you decide that no matter what you’re going to wake up at 6 am every morning or 7 am every morning and just get to work immediately. That could be an example of this.

Or another example from my own life, aside from filming videos really consistently. I also prioritize emailing my email list because that is how the majority of the relationships are really built-in my business and the sales are made. My number one non-negotiable these days is that every single Tuesday I write and I schedule an email to my email list, that gets sent out on Wednesday mornings, so your non-negotiable, it might be something completely different, you might not even be business-related. It might be health-related or family-related or have something to do with your finances, but figure out your one to three different non-negotiable things, and especially figure out exactly when you’re going to do them because that will make it much more, much easier to be a lot more consistent with them.

That brings me to the end of Five tips for how to be consistent in your business or consistent for any goal that you’re working to achieve. Let me know in the comments what tip you found the most helpful!

How to Change Your Life in 6 Months