Is it Too Late to Start a YouTube Channel in 2020? - Gillian Perkins

Is it Too Late to Start a YouTube Channel in 2020? 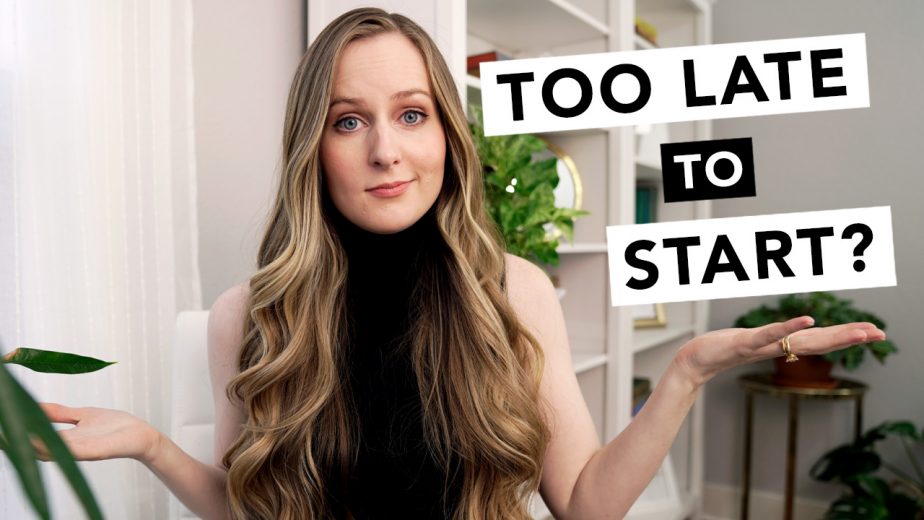 As you’ve watched YouTube videos over the years, you might have decided that you’re interested in starting your own channel, but you also might be a little bit worried that it’s too late… Maybe you feel like you’ve missed the boat because YouTube has continued to grow and there are now so many creators on the platform. Maybe you feel like making videos of your own will just be a waste of time because you think they’ll never be found.

But, you know what? Because of the way that YouTube works and the way people consume YouTube videos and interact with channels, the truth is that there will always be room for new creators.

Channels THRIVE by building communities. They attract subscribers that are interested in what they’re talking about and interested in their point of view, and once those people watch their videos, they often decide to subscribe — regardless of how many other channels are out there.

In today’s article, I wanted to talk about some of the different things that you should consider if you’re thinking about starting your own channel and whether or not it’s too late. We’ll also talk about ads and how they’re paying these days, and whether they pay better or worse than they used to. So, here are some things you should keep in mind if you’re considering starting a YouTube channel.

First, here are several reasons it’s NOT too late to start a YouTube channel:

#1 Channels will die out and interests will change.

Even though there are more channels on YouTube year after year, old channels are continually dying away. Sometimes creators stop posting videos or their subscribers lose interest, and that means that there’s always room for new talent coming into YouTube!

The other thing you should think about is that the interests of theviewers who are watching these videos are changing. These are real people who are growing and have evolving tastes! So for that reason, YouTube can really NEVER become saturated with creators.

#2 Your perspective is unique.

Aside from people with changing tastes, your videos are not going to be the same as what’s already out there. There are SO many different ways that creators differentiate themselves just naturally without even trying:

All of this means that it’s relatively easy to differentiate yourself from your competitors!

This is another reason why you don’t need to be afraid of the competition. Now, I’m not going to say that YouTube is really difficult or that there’s only a few people who can do it or anything like that, but it definitely takes some real effort, dedication, and commitment with your time. You need to do the planning, you need to be somewhat creative, and there needs to be some passion behind what you’re doing because that passion will come across in your videos and people will watch your videos more if you have that passion. Also, you’re not going to stick with your channel if you don’t have any passion behind what you’re talking about or the videos that you’re creating.

#4 YouTube’s Algorithm is there to help you.

YouTube algorithm is there to help you out! If you make videos on topics that people are interested in and your videos are better than the competition’s videos, then YouTube will push your videos to the top. It will suggest your videos to people who are interested in those topics. That means that you won’t have to do all the work of trying to stand out from your competition trying to get seen. The algorithm does that work for you! Also, this year, more than any other year, the algorithm is better than ever. YouTube’s algorithm has continued to improve, and has gotten better and better at pushing the best videos to the top.

But, there’s also something you need to understand:

It will take time.

Now, one thing that I do want to warn you about before you even get started is that whenever you first start your channel, whether you start now or you start a year from now,  it will probably feel like it’s not working or going anywhere at first. That’s just because…it takes time.

I’ve had many videos that long after I made them went viral. In fact, the very first video on my YouTube channel only got a few views out of the gate, but then about six months later it took off. The algorithm, figured out who was interested in it, started suggesting it to people, and it went on to get hundreds of thousands of views!

Ads used to pay pretty well on YouTube, and then a couple of years ago there was the ADPOCOLYPSE!

Basically, a bunch of YouTube’s biggest advertisers got upset with how some of their ads were being shown and they all pulled their ads. This was a big problem for YouTube because they relied on that advertising money to stay in the green and to be able to continue to operate. YouTube had to solve this problem very, very quickly, so they essentially blacklisted a whole bunch of keywords that could be in videos, video descriptions, and in video titles that the advertisers might (possibly) find offensive. This meant that a LOT of videos got demonetized.

Ever since then, YouTube has been working on improving their algorithm for determining which videos are suitable for advertisers. At this point, it actually works very well and there are few categories of videos that can’t be monetized. It’s also pretty easy to understand. Youtube has guidelines as to which types of videos will be eligible for monetization versus which won’t be, and so most YouTube creators are just fine and they’re able to make good money from those ads.

The reason for this is because there was actually a little bit less competition than there used to be before adpocolypse. Before adpocalypse, YouTube put ads on ALLthe videos, meaning there were very few videos that were demonetized. Most of them were only demonetized for copyright reasons. Now that it is a slightly more curated group of videos that can be monetized, there’s a little bit less competition so you can earn a little bit more.

Right after adpocalypse, people did earn less because there were fewer advertisers, but now that most of the big advertisers have come back and YouTube has overcome this problem, there are more advertisers than ever who want to advertise on YouTube, so they’re willing to pay more for YouTube ads.

So, right now the situation is better than ever — people can earn GREAT money as YouTube creators and it continues to improve!

My top tip for standing out from your competition:

Be CRYSTAL CLEAR on the format of your videos.

What do I mean by that?

Well, there are basically eight different primary formats that a YouTube video can have. These are:

We won’t go through what all of these formats are, but I want you to understand why it’s important to have a recognizable format for your video and how it can help your video to really stand out from the competition.

Basically, if your video has a format that your viewer will recognize, even subconsciously, then they’ll be more likely to watch MORE of your video to stick around for the ending that they know is coming.

Think about a movie that has a recognizable plot where you have a hero who encounters some sort of problem and then is working to overcome that problem. You want to keep watching that movie until you see the problem resolved. Right?

On the other hand, if you are watching a movie where there is just a bunch of random events going on and they aren’t building up to any sort of climax, then you’re probably going to lose interest in that movie and stop watching it.

So, as you’re making videos for your YouTube channel, it’s important that you take advantage of this.

For example, the first video format that I mentioned is the listicle video format. In this type of video you might list the Top 10 Travel Destinations of 2020 or the Top 10 Budget Cameras that YouTube Creators Could Use. In each of these types of videos, you’re going to be listing a certain number of things and the viewer will stick around for the entire list, or at least most of it.

I know that the format of your video might not seem like it’s going to have a huge impact on your channel, but it can help to differentiate you from your competition. If your competition is making videos that are a little bit less structured or rambly, but your videos have this predictable flow, it can help people to watch your videos for longer, which will help your videos rank better, and help you to get MORE VIEWS, which is ultimately the goal.

So in conclusion, no, it’s not too late to start a channel on YouTube and you have NOT missed the boat! There is still a BIG opportunity here, and in fact, as YouTube has continued to improve and advance their algorithm, the opportunity for growing your channel and becoming a successful YouTube creator is actually a bigger and better opportunity than it ever has been in the past.

The best news is that the MORE interested you are in becoming a YouTube creator and the more PASSION you have behind that interest, the EASIER it will be for you to succeed.

Here’s to your success!

I love hearing from you. What’s holding you back from starting your channel? (Or, if you have started — what finally motivated you to start?) Leave a comment down below!

How To Create A Sales Funnel For FREE: Step-by-Step Tutorial