How Jane Kalmes Generated $8,400 with Her Beta Course Launch 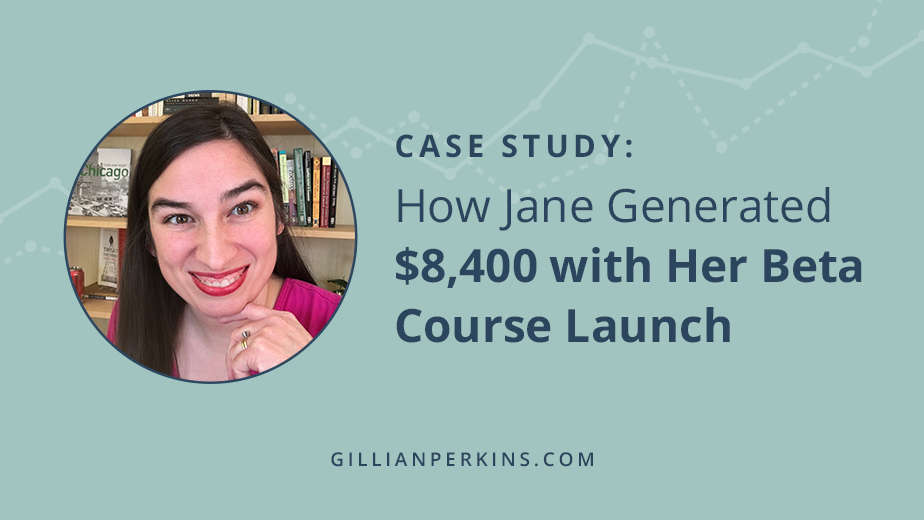 If you knew you could turn your hobby into a full-fledged business in just eight weeks, would you go for it? What if you knew you’d gross over $8,000 in your first product launch? Sounds unbelievable, right?

Well, it happened for Jane.

Jane Kalmes has a passion-project YouTube channel called “Fiction Technician” where she talks about how to write mystery novels.

When first hearing about VALIDATE, she was thrilled because she had been looking for a way to turn her hobby YouTube channel into a full-time business but had no idea where to start. She felt stuck trying to grow her channel and reach more potential customers, and she didn’t entirely understand the process of effectively launching a product and building a solid business foundation.

Jane’s expectations were small, so she initially planned to create a short mystery writer’s workbook. However, through the VALIDATE program, she quickly realized that her audience wanted something different! They were looking for a more guided, step-by-step process, and her small workbook was expanded into a live 8-week training course.

“Talking to those customers was just incredibly galvanizing and exciting, and I just began to see that it could be more than I hoped it would be. I began seeing how similar they were to me and how equipped I felt to solve their problems.”

Jane’s biggest concern before joining VALIDATE was if the money she spent on the program would be something she’d see a return on. How would her concept be able to go from thoughts in her head to a product someone would actually want to buy? Would she be able to take the product to completion?  And, even if she did create this product and people wanted it, would they want it from her? Would she even be able to earn at least $300 back? Impostor syndrome crept into her mind. Did she have enough social proof and authority to really sell the product?

“Throughout my life, every time I have taken myself just a little bit more seriously, just invested a little bit more, it’s always been a good choice – which is not to say that all of those projects have always worked out well, but it always has been the right choice. I have always profited or learned or improved.”

What helped Jane overcome these doubts was her overall hope and enthusiasm for mystery writing. Her passion took over the edge because she wanted to put the ideas out there in the world in a practical form that could help other writers find their own breakthroughs and finish their mystery novels.

Through VALIDATE, Jane learned how to talk to her audience and figure out what they want, which, in turn, has helped her serve them even better. It’s allowed her to make a course her audience was excited to buy, and also pushed her to make her ideas about mystery writing very concrete and express them in a step-by-step way that makes the mystery writing process simple for her students.

“After completing the VALIDATE course, I launched a mystery writing course, which is called Simple Mystery. My very wildest expectations for how many customers I would get were vastly exceeded.”

Jane felt that 6-10 sales would be good results for a first launch, and her most outlandish goal was to possibly enroll 40 — but, by the end of her beta launch, 42 students had registered! With her course priced at $200, she grossed $8,400!

Her investment more than paid off, and her initial concern of making the money back that she spent on VALIDATE was squashed.

“The biggest payoff for me is just getting my course out there in the world. All of my ideas boil down to concrete steps that people can take and benefit from. I really love the idea that I am serving other writers and helping them to make the books that they’ve been dreaming of – sometimes for years.”

Here’s the big question: Would Jane recommend this program to a friend?

“If a friend asked me if they should join VALIDATE, absolutely, I would say yes. I mean, I’d go further than that. I’d say that I am talking up VALIDATE to the people in my life who I know are interested in launching a business or a product because I think it has been incredible. I love the program.”

Build Your Online Business with the Power of Community