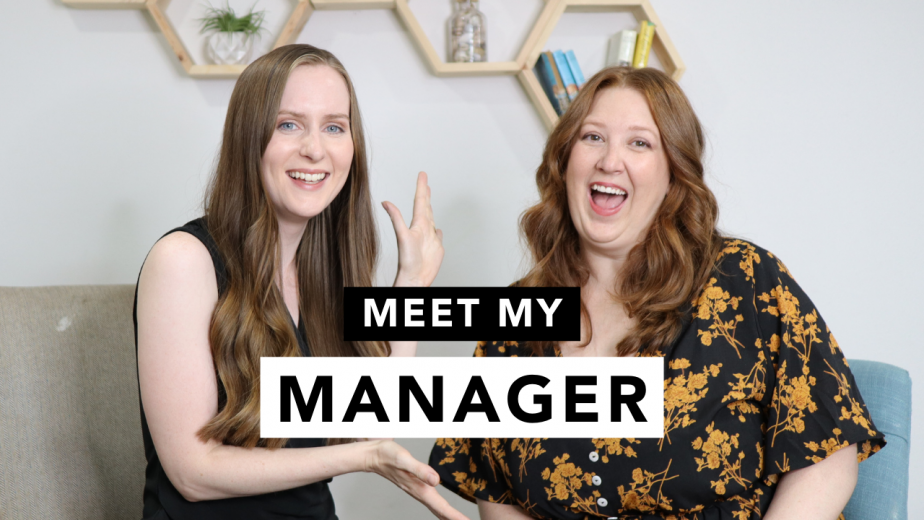 Today, I want to introduce you to my online business manager, Cortni Loveridge. Cortni and I have been working together online for 2 years now so I wanted to share a little bit about what she does for me, how she’s helped me in my business, and why I chose to hire her originally.

Cortni is the brains behind the machine. I originally was interested in hiring an online business manager because I read a book called Rocket Fuel that talked about the difference between two different types of leaders called integrators and visionaries.

Visionaries are the people who are often very messy with their ideas so they know where they want to go, and they have this vision, but they don’t necessarily know how to get there, they’re often the people you see as like the face of a company. Integrators are the person who helped to integrate all the pieces of the business and help it all like be a smoothly operating machine, and just to have the projects actually get done.

A couple of years ago I read this book and I immediately recognized in myself that I was the visionary and that mostly I was missing all of the integrator positive attributes. So, I started looking around for someone to hire, and that led me to hiring Cortni. She’s been just a godsend in my business and helped me in so many ways.

What is the role of an online business manager?

You can think of it as a director of operations. Essentially, the Online Business Manager makes sure that all of our projects are getting done at the right time by the right people. The online business manager ensures that projects are in alignment with what the business owner wants to do and that those projects are being completed.

How does an online business manager stay organized?

Cortni’s strategy to staying organized is to identify each month what are the main three. The main three projects that really are key to the company’s progression throughout the year and our goals. On Friday’s, Cortni looks at those three projects and picks the three main tasks to accomplish to really push the projects forward.

Some of those are team-related like following up with the team to make sure they have what they need. Sometimes they are tech building.

How often do you meet with your online business manager?

We will meet together at least once a week, and sometimes more often. It all starts with kind of these big picture planning meetings that we’ll do at the beginning of the year and at the beginning of each quarter. We plan out what projects I want to complete and I really appreciate the strategic thinking that Cortni brings to the table. Sometimes I have ideas for projects that I would like to do. Cortni helps me to be a little bit more realistic about which projects make the most sense for my bigger picture goals.

After we do those planning meetings, every week we meet together and we look over the issues that the business is currently facing. We try to come up with solutions for those problems, essentially, and then we also look at the projects that we want to complete and we assess what the next task should be to keep those projects moving forward.

I want to make sure that you really understand what she does for me because I know we’re talking about big picture terms here, like how she’s helping the business to run smoothly but that’s kind of vague or big picture.

What does Cortni specifically do for me?

Cortni does a lot of project management. As an online business manager, it’s actually not quite just project management, there are other things involved as well. So you have things like team management, making sure they have everything they need to do for their jobs and to be able to get those projects done.

She also manages the processes. It’s really important for any business to be able to run efficiently. We want every team member to be replaceable. That also sounds harsher than it is, but what I mean by that is just that we have good standard operating procedures in places. We have recurring tasks so that we know that the things are getting done at the right time.

One of the other things is creating a virtual space for the team to operate. We chose the project management tool Asana. Cortni plugged in every single thing that needed to get done all the projects all the recurring tasks and just set it up like a well-oiled machine. As the business has grown over the past couple of years working together with more team members and just feels really satisfying knowing that they know where to check in to do their work and that they have everything they need to do their work and they have a hub to be able to communicate as well. She set up slack so that we could be much more organized as a team and work together more effectively. In Asana, we could also see exactly what we needed to do, like, the specific tasks and when they were due.

Prior to Courtney setting those systems up, I was getting things done, but I was mostly working off of to-do lists. It definitely was going to keep my companies really small as I tried to expand in terms of team members. It was just really a system that worked for one person but I wasn’t going to be able to keep a whole team of people accountable, to get their work done on time, or really communicate with them effectively what I wanted them to do without those systems.

I was pretty oblivious to like those systems even existing or their potential. That was a huge thing that Courtney did and something that was just so valuable to me.

How much does it cost to hire an online business manager?

I’m sure that you are probably interested to know the kind of like the numbers behind this, how I made the decision to hire, decide if that was a good financial decision, and how those numbers have worked out for my business.

When I first hired Cortni I was unsure if this is going to be profitable for me but I very quickly started to see some improvements in my business. Cortni stepped in and started taking over in the best way possible. I just immediately started seeing the benefits but of course like my income didn’t start going up immediately. I would say probably within the first six months or so I did find that I was my business was making more money just because I was able to focus more on the things I was actually good at. I was growing the business.

What’s interesting about hiring an online business manager, is that they don’t really directly make you money. You have to kind of have that bigger picture to see that they’re enabling you to do the things but like actively making money. Thanks to Courtney, my business went from earning $15,000 a month gross, and now today my business is earning an average of about $42,000 a month gross, and so that’s obviously a huge impact.

When I say she’s not actively making me money, I mean she’s not a salesperson. Cortni is the one who keeps the machine running behind the scenes so that I’m able to go out there and do that marketing work, and that really is extremely valuable.

Today, I’m paying Courtney just short of about $5,000 per month. She’s working about 18 to 25 hours a week, sometimes a little bit more for launching or bigger projects. So definitely not full-time, which I think is really interesting.

I see a lot of other YouTubers will hire some sort of manager or some sort of agency to manage them or represent them. The main difference that I see with this is that a lot of the time people are hiring someone to really run their brand. The influencer will still be doing the creative work, they’ll still be coming up with the content but they’re not even really running their business they’re letting this agency kind of run their business and get them the sponsorship deals and things like that.

In my business, it’s more like Cortni and I are partners who are running different parts of the business, and I’m creating the plans for where we’re headed, then she’s just helping me to do them and helping to run the business in the process but I would say I am the captain of the front of the ship! Whereas I think that when people do hire one of those agencies the operation side of their business is really being driven forward by the agency. It’s also just kind of different kinds of work.

Normally when people hire an agency like that, they are mostly focused on just trying to get sponsorships, or maybe create merch. But in our case, we’re running a business, and the content is really just a piece of the marketing, but we’re more focused on the products and so we’re doing product development and product delivery.

There are a lot more moving pieces so that’s just a few differences that I see. I hope that you all have found it really interesting to learn more about Cortni and she does as my business operations manager. She really is the brains behind the operation, and she’s how I’m able to appear like be everywhere and do everything because I’m not at all I’m just doing mostly the very visible work and she’s doing the invisible work behind the curtain.

If you found this useful, check out my Youtube Video How to Hire Your First Employee (+ WHEN to make your first hire!) | Episode 9 – Small Business 101.

6 things you must do BEFORE launching your business (set yourself up for success from the start!)