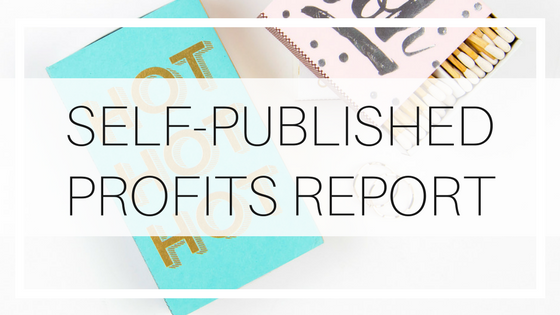 Exactly How Much Money My SELF-PUBLISHED Book Earns Each Month

Almost two years ago, I self-published my first book. As I’ve shared in a previous post, at the time I had virtually NO audience whatsoever. My blog was unknown, I wasn’t on Youtube, and I didn’t have a following on any social media platform. 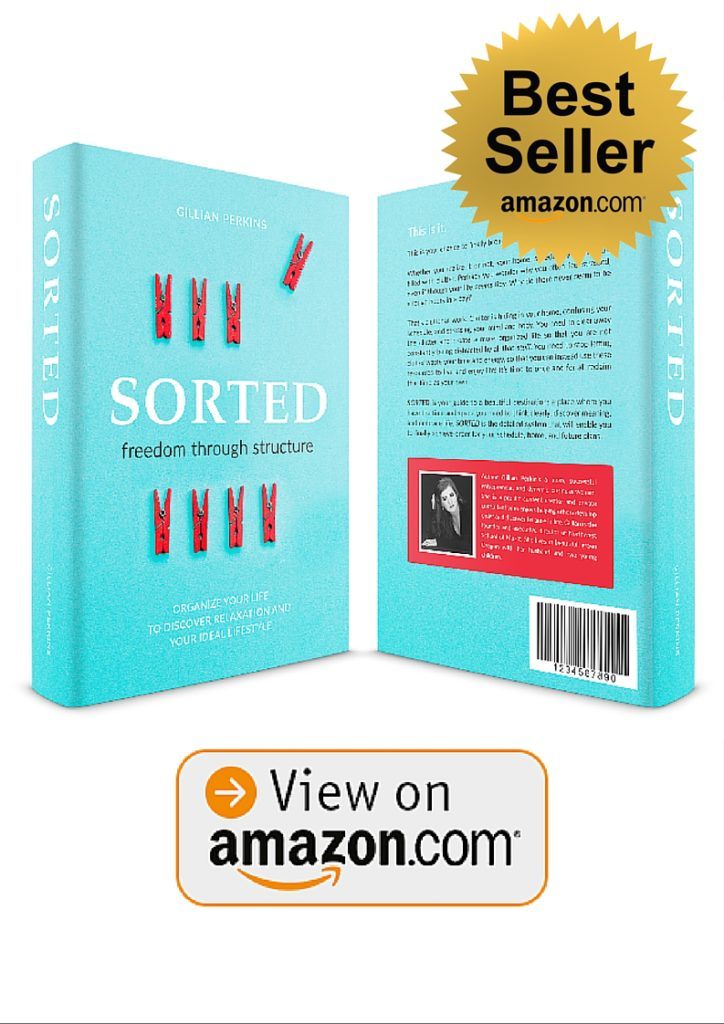 Honestly, I didn’t even know if I’d sell five copies of my book.

But, after a lot of research into promotional strategies, I launched — and was pleasantly surprised by my book’s immediate success. Within the first week, it had sold over 10,000 copies and become an Amazon international bestseller in four categories.

Why I Gave Away My Book for FREE

Now, a significant part of my launch strategy was to give away as many copies of my book as possible, to get more exposure and raise my ranking on Amazon. Anonymity is the worst enemy of any author, and I knew that the only way my book could possibly be successful was to get visibility.

But, despite giving away thousands of copies of my book, I still made some money as well. All told, over the course of the launch, I made about $3,000. Here’s a breakdown of this profit:

The paperback sales came via Createspace, which I had used to self-publish the paperback version of the book. For each paperback copy that sold, I make about $5.50

The eBook sales were from Kindle Direct Publishing. Initially, I was giving away the ebook for free (for the first three days), but in the second half of the week, I raised the price to $0.99 and then to $2.99. I made an average of $1.20 per ebook that sold during the launch.

Finally, during the launch, I was heavily promoting my book, especially while it was free. That meant I was sending tons of people to Amazon — and of course I was using my Amazon affiliate link. And THAT meant that even if my book was free, I was getting 4% of the price of anything these people bought within 24 hours after clicking my link.

And while those little commissions certainly can add up, the biggest chunk of the affiliate change actually came from people who were signing up for a free trial of Amazon prime after using my affiliate link. Amazon pays $45 per free signup, and that can really add up.

Two years later… do I continue to make money?

Now you’re probably wondering exactly what I was at that point: Okay, $3,000 isn’t too bad for a first-time author’s self-published book… but how would book sales do, going into the future?

So, the thing about my book was that it was just a passion project. I wasn’t trying to become a full-time author, and it wasn’t directly related to my business. I did it for fun, for the challenge, and to fulfill a lifelong dream of mine. But I wasn’t really in it for the profit.

And that meant that, after I got through the process of writing, publishing, and releasing the book, my goal was accomplished — and I didn’t care much about continuing to promote my book.

(I’m a girl of many passions, always interested in pursuing some new, different goal. By the time my book was released, I was very ready for my next adventure.)

All that to say, the following monthly revenue numbers are the results of practically ZERO promotional efforts over the past 18+ months. The reason that my book has been able to sustain this level of sales has purely been the result of the initial momentum it got from the strategic launch. 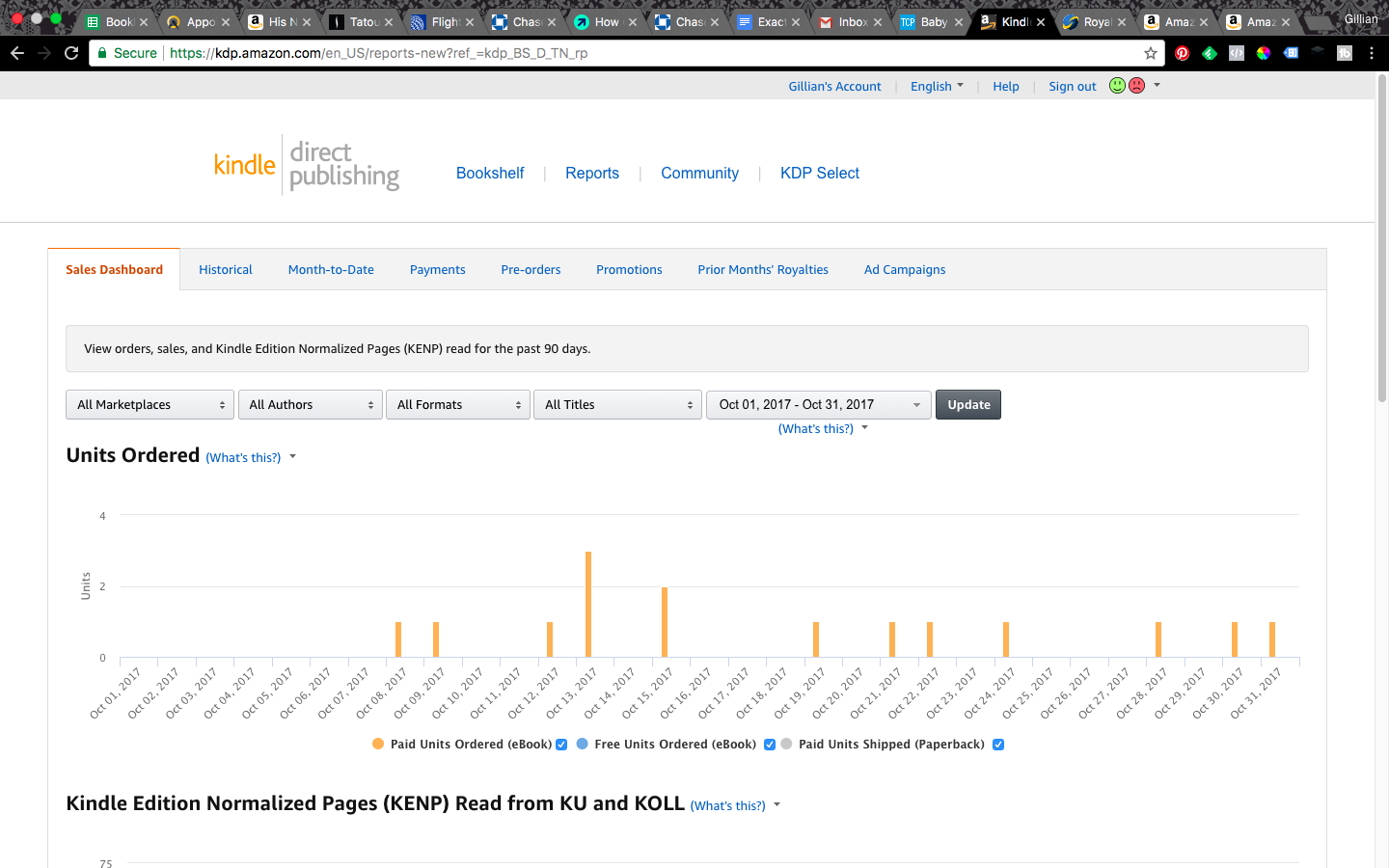 In the month of October (the most recent month that I have complete data for), the ebook sold about 15 copies, and my profit was $74.05. (After the launch finished, I raised the ebook price to $5.99, so my profit per copy became about $4.50. However, just recently, I raise the price to $9.99 to see how sales were affected. So far, it seems like I’m still selling the same number of copies, but now I’m earning around $7.75 book sold. Accordingly, my November profits are trending higher than they have in past months.) 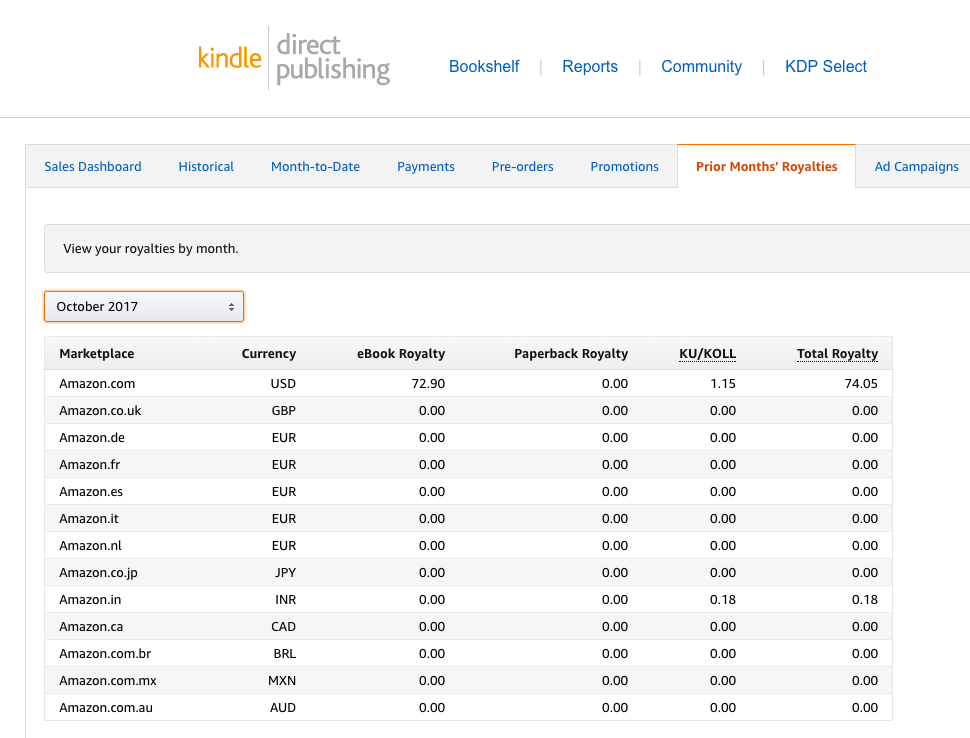 The paperback version sold about 10 copies, and my profits for those added up to $52.20. 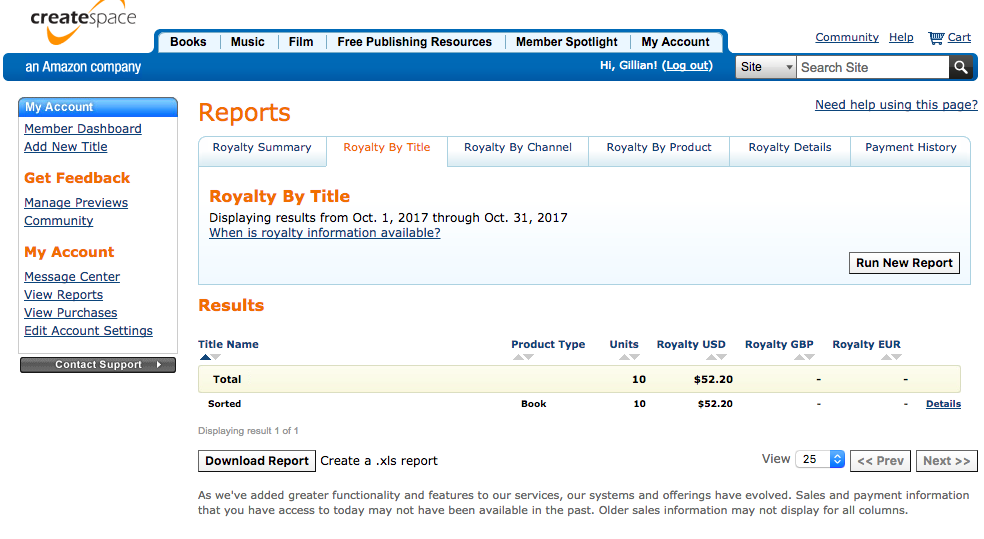 Since I’m barely promoting my book at all anymore, I don’t get much from Amazon affiliates, and what I do get varies wildly from one month to the next. In October I earned a whopping $2.40. 😛 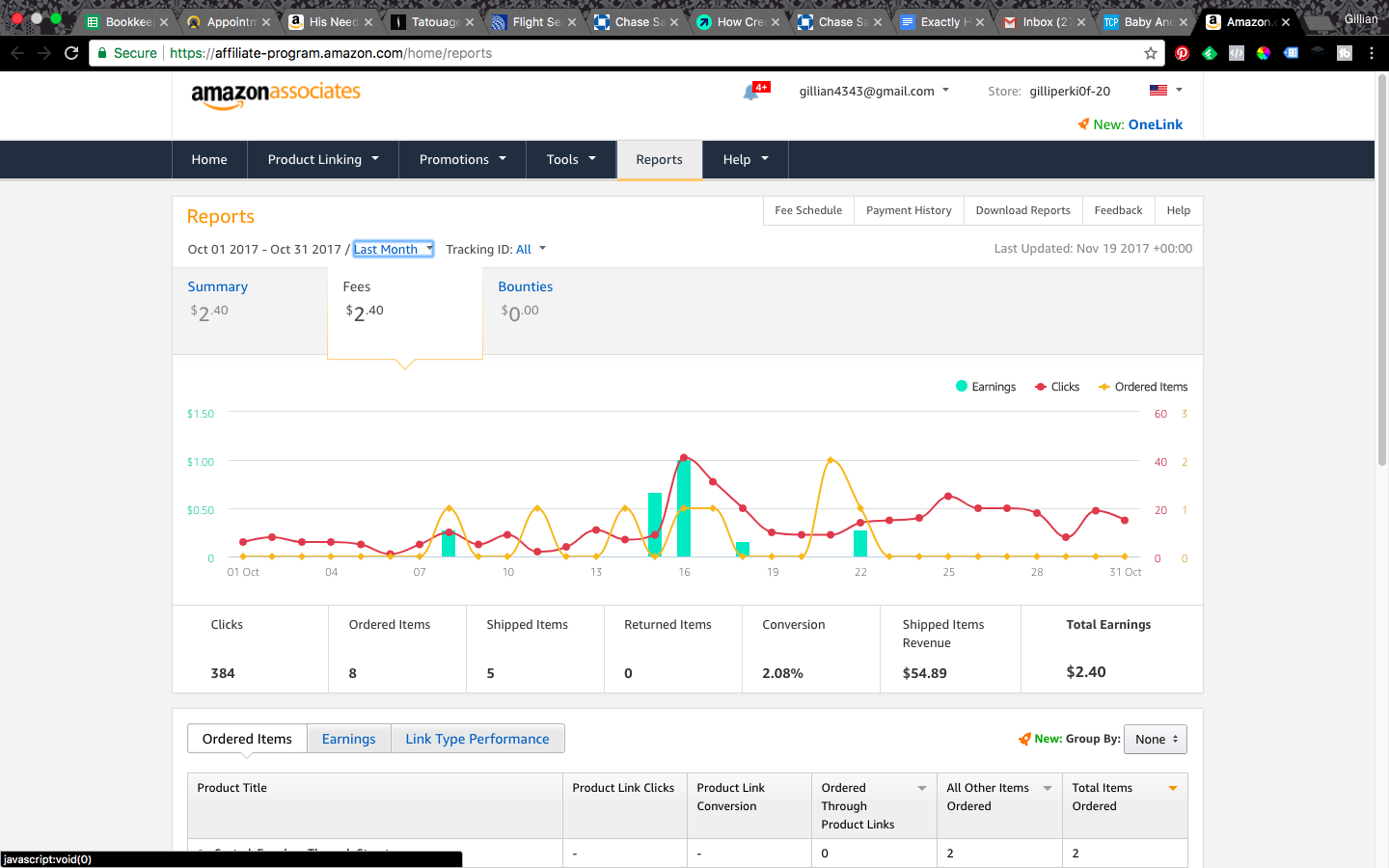 All told, I earned a grand total of $128.65 from my self-published book in the month of October 2017. This was a fairly typical month, but a bit less than average. I would estimate that my most average profit is $150/month. 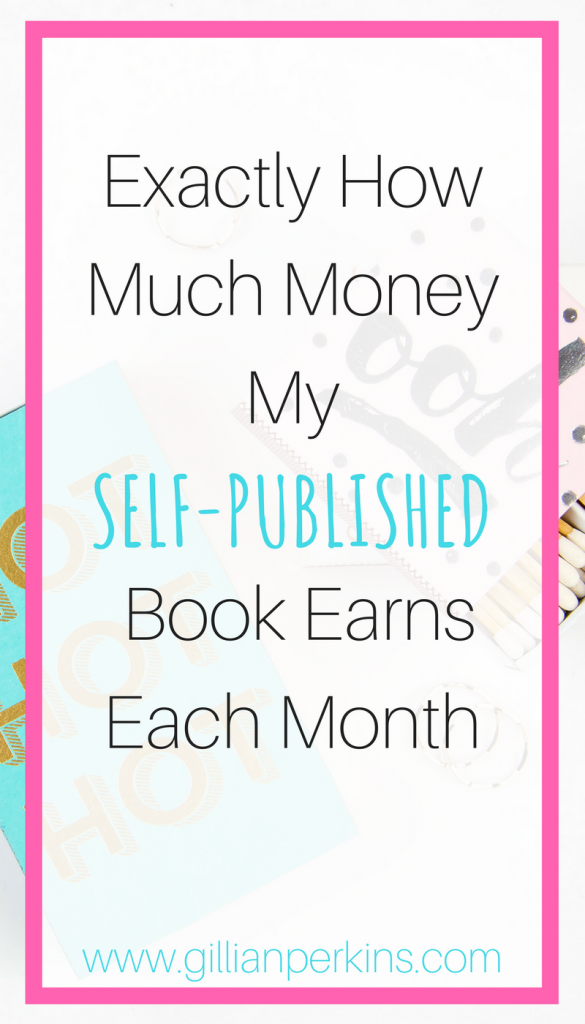 As I mentioned previously, I’m currently not spending any time promoting my book. Based on my experience, and the experiences that I’ve had helping about 15 other new authors self-publish their books, I am confident that it is easily possible to earn a full-time income as a self-published author, if one is willing to put in the work to consistently promote their writing.

Personally, though, I’m quite pleased with a little extra, 100% passive income each month! 🙂

The most important factor in my book’s success was the strategies I used to launch it successfully and increase its exposure and ranking on Amazon.

Nearly two years down the road from publishing my book, these strategies continue to be the topic that I get asked about the very most often. So, I’ve finally decided to host a workshop where I’ll be teaching everything I did to launch my book successfully.

The workshop will be held on Wednesday, November 29th at 11:30am. (There will be a recording available afterward if you aren’t able to make it to the live, online event.) It will be a packed 90 minutes that I guarantee will have a MAJOR impact on the success of your self-published book. The cost is just $29, and includes the live workshop, a recording, bestseller book launch workbook, and, as a bonus, 2 chapters of my own Amazon bestseller.

Planning to self-publish sometime in the near future? Click here to join the workshop and learn everything you need to know about successfully launching your book. 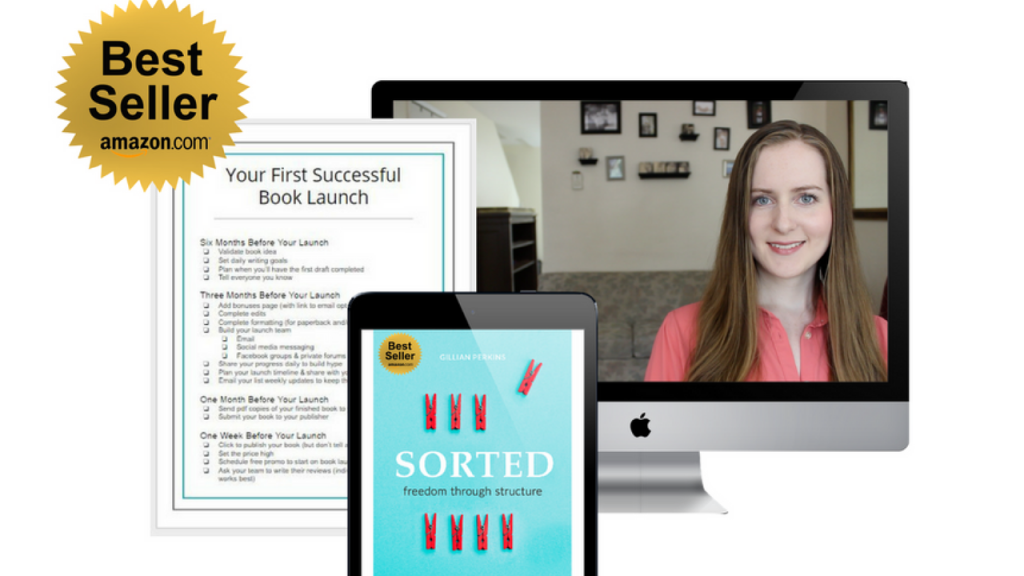 How to Plan an INSANELY PROFITABLE Sales Funnel