How to STOP Spinning Your Wheels and START Making Progress 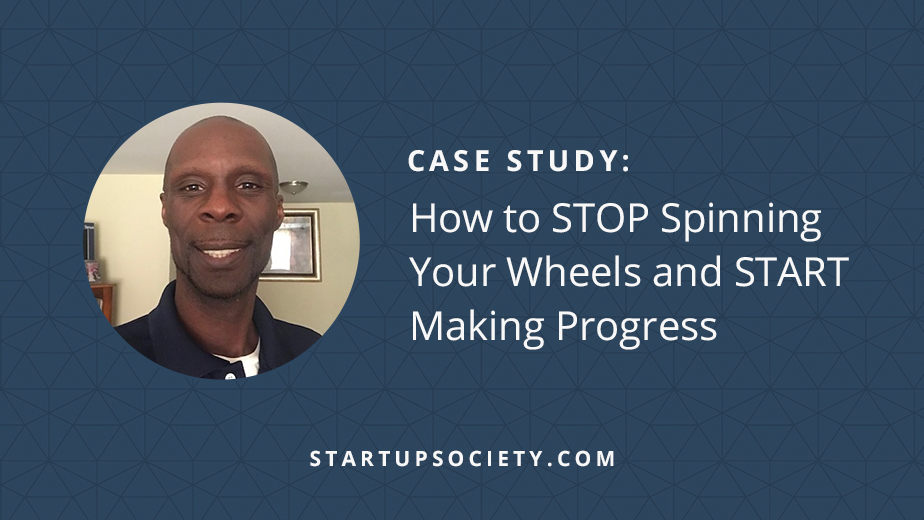 It’s what we all want, right? To know what we need to do to get the result we want. But often, building an online business feels anything but step-by-step. Instead, it feels like a tangled mess of too many options, and we get left feeling indecisive and stuck.

Here’s an example of someone who was in just that place (stuck!) and how he got out of it:

Meet Paul Simmons, a process-focused graphic designer. Paul felt frustrated because he was spinning his wheels trying to create structure in his business. He felt like the whole process was disorganized and that he could never manage to create the solid foundation he knew he needed to grow his business.

“My main goal was to have a real structured, legitimate business that I could be operating in and finding success with, knowing I have a good, solid foundation.”

Paul helps business creatives combine story with marketing to generate leads and convert sales. When he was in school for graphic design, he noticed courses never touched on marketing or sales. If designers decide to work with an agency, they will have a marketing department to lean on, but if they decide to branch out on their own, they aren’t prepared to promote or market themselves effectively to potential clients.

As he worked to get his business started, he realized he was trying to do all the things at once and didn’t have a clear direction for which steps to take when and what the processes should truly look like.

“I was trying to get my business off the ground, working on the website, trying to get my social media pages set up, doing a lot of foundational work. Sometimes it’s kind of hard working for yourself by yourself. And some days you get distracted, and then you’re doing this over here one day, and then you’re over here, and there wasn’t really a clear, step-by-step path that I was knocking things down and getting things done.”

That’s when he found Startup Society and realized it had the clear path and systematic method he was searching for. But, he didn’t just jump in straight away because he thought it would be way too expensive of an investment.

He thought he needed to have even more things set up before he joined the membership, and another three months went by.

The thing is, he always knew Startup Society would be valuable to him. But what ultimately made him overcome those hesitations, was that, no matter what he did or how hard he worked, he just wasn’t getting anywhere. He was still all over the place without that clear direction, spinning his wheels. And finally, enough was enough.

Even better, looking into the membership, he realized the monthly payment option was super affordable for the budding entrepreneur on a limited budget, and that made his decision to jump on board easy.

“Once I understood that Startup Society provided the step-by-step process, I was all in.”

The structure the membership has given Paul has been exactly what he needed. When he sees himself veering into a distracting direction, he can now simply re-focus and get to work on his next action step. Since joining Startup Society, Paul has accomplished many things to create a solid foundation for his marketing business. Here are just a few:

Another bonus Paul discovered was the tight-knit community of entrepreneurs within Startup Society who are ready and willing to answer questions, provide feedback, and network inside the private online workspace. He says seeing so many entrepreneurs from different backgrounds and walks of life engaging and interacting with each other is encouraging. Having the support of growing business owners has been pivotal for him and his business in the times he feels isolated working on his home computer.

If Paul never joined Startup Society, he says he would still be where he was prior — still all over the place — doing a little bit of everything on different days but not really accomplishing any of his objectives or goals.

“The biggest payoff for becoming a member of Startup Society is the step-by-step plan. Sometimes you can be busy doing a lot of things, but you’re just spinning the wheel, and, even though you’re doing a lot of things, you’re not really moving forward. I have a sense of accomplishment that I’m moving closer and closer to my end goal.”