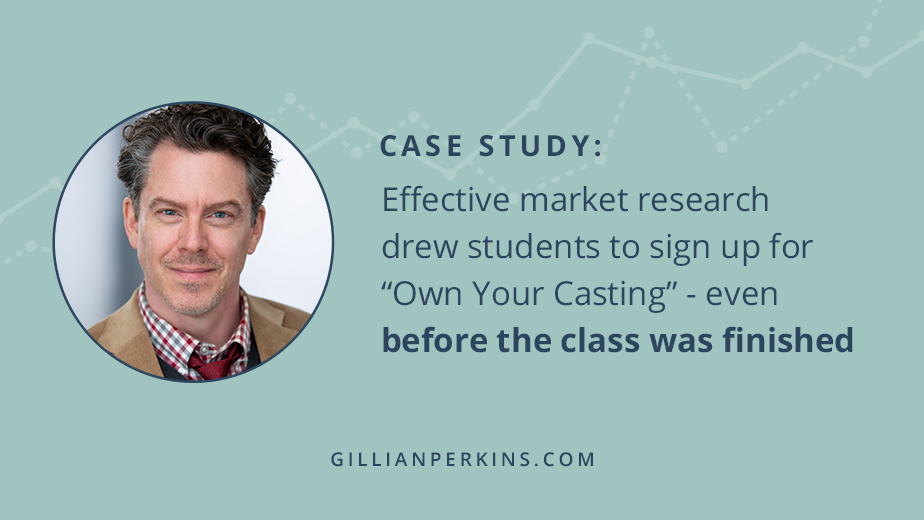 Will Doughty had been wondering for a long time if the class he had in mind would actually be something that actors would want for their professional endeavors. He needed validation, and he had no idea how to get it.

Will is a coach with Off-Book Acting who helps actors in acting performance, audition preparation, and self-tape performances. He’s been working in the industry for about 20 years and teaching for 10.

“The biggest goal I wanted to obtain with VALIDATE was exactly what actually happened to me, which was, can I create a course from scratch, put it together, package it, market it, get people to sign up, and actually get paid to do something I created out of nothing? I was really curious, could VALIDATE actually do all of those things for me? Oh, by the way… It did!”

The fear of not wanting to stay where he was is what helped Will overcome his hesitations of, “Will VALIDATE work for me?” He feared if he didn’t do something now, then three months would fly by and he’d be in the same place he was, dreaming about his class idea but doing nothing about it.

“If I had never joined the class, I am pretty sure I would still be in the concept mode of my idea and not in the finishing a course, moving on to how do I build a better second round? I would probably still be in that awful feeling of, I know there’s something better for me, but I don’t know how to make that actually come to life, and I spent a lot of years doing that because that’s the hardest part. It’s really hard to put yourself out there and risk that it might not be good.”

Will’s biggest problem initially was how to reach people he’s never met, but throughout the 8-week process, he was shocked at how easy it was to get perfect strangers to talk to him about their acting career. He was blown away by the market research process VALIDATE took him through and the reach he gained through it.

“All my money was absolutely worth those two weeks of just, how do I market? How do I reach people? This is so much easier than I realized. What’s been holding me back all these years? I kind of laughed at myself. I was like, what have I been afraid of?”

Will felt like VALIDATE was a micro version of a business degree, teaching him how to build a business, market effectively, and create follow-through. In the entertainment world where Will lives, it’s about feelings and the process, so one of his biggest wins was understanding how to create a really tangible result for his clients, which made his product much easier to market.

By week 6 of VALIDATE, Will already had actors knocking on his door, signing up, and paying him to take the “Own Your Casting” class he was putting together.

“I was able to achieve putting together a whole course and sell it. I’m celebrating the end of a first round of this course that I created through VALIDATE, and I have several clients that are very pleased with the progress that they’ve made and the results that they had.”

The question is, would Will recommend VALIDATE to a friend?

“​​If a friend of mine asked if they should join VALIDATE, I would say, if you have an idea that you think other people would benefit from, yes, you should take this course. It’s really excellent. I mean, the best thing I can say is, it worked. I did the work and it worked. Even if your idea doesn’t work, you get so many skills behind how to build something that would work. It’s a system, not just a one-time win.”